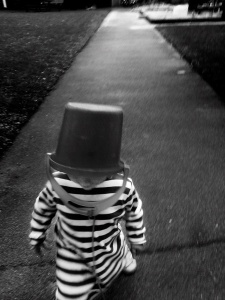 How important is it to involve your children in everything you consider to be childhood-related from the youngest possible age?? Having just missed both Halloween and Fireworks Night I’m feeling a bit deflated after reading and hearing about so many seasonal activities from so many friends and other bloggers. I have friends who have been taking their four year old to amusement parks and trick or treating (at age 2), and motor shows, museums, golf, cinema trips and even a science centre at age three (which I was told was suitable for kids from about 7). I’m not in any way saying that any of this is a bad thing, I’m just trying to understand why we haven’t done any of this stuff and figure out whether its because I’m just a lazy mum or whether I can actually justify this by saying its too much too soon for us. Kids will have time to experience all these kinds of things after the age of four and on throughout their childhoods won’t they?

I also think that its much more likely that EJ (or any second or subsequent child) will experience things more advanced than their developmental level much earlier than they would have done otherwise simply because of the fact that they will be ‘along for the ride’ with their older sibling.

Don’t get me wrong, we’ve done the seaside, children’s farms, Peppa Pig World, Legoland, we even took JJ with us to Menorca for our honeymoon (there was an onsite creche!). So its not like we haven’t done stuff but its just been chosen with the ‘tiny tot’ age in mind.

I’m sure I read something recently about people who are so excited about having a child that they whip out the childhood ticklist immediately, ending up at a zoo with a 6-month-old baby who turns out to be more interested in a one-legged pigeon than the rhino hanging around behind it. (Having said that I did take JJ along on a zoo trip aged 9 months but it was a trip organised by our local baby group so I guess its not unusual!).

Now I’m beginning to wonder if parents of the future won’t write a ‘bucket list’ for their kids as they slip into adulthood and get them started early with a tandem parachute jump (aged 15), a trip to Everest base camp (aged 16) and a five-star weekend at the Ritz (aged 17). They’ll hit their 30s and there’ll be nothing left to do but sit and watch mindless telly for the next 4 decades…

Right now I’m just glad that the seasonal stuff is almost over – oh, then there’s Christmas!!! I can safely say that JJ will be more excited about Santa’s imminent arrival than ever before this year so I’ll make every effort to make it as special as possible for him. I just wish I had a week child and work free so I could get my head round the shopping, organising, stocking filling, decorating and…erm..baking?? (Ha Ha Ha! ((as opposed to Ho Ho Ho in this context!).

Is there anything you wish you’d done with your children younger or feel guilty about them missing out on? Should I be planning that trip to the National Gallery/Natural History Museum within the next six months so that my children get some culture rubbed off on them (possible screaming, tantrums, over-tiredness/hunger/boredom aside)? I’d love to get some comments on this subject…

6 thoughts on “Better get going on the Childhood Bucket List!”