A few months ago my friend and occasional childminder let it be known that there are certain things which she collects to be sent off and used to raise money for charity. These include baby wipe packets and milk bottle tops (the plastic ones). I began putting these things aside and handing her the odd little plastic bag full. Then it occurred to me that I work in an office where about 30 different staff members all bring in their own milk each week (don’t ask me how it came to this – I used to be milk monitor at one time but that all fell by the wayside). So I put out a little tub for anyone to discard their used milk bottle tops in. So easy, no one has to go to any trouble whatsoever as it is just as easy to pop a lid in my tub as it is to lean over and chuck it in the bin.

Then someone asked me what the lids were for and I was pretty vague. All I knew was that my friend was collecting them for charity but I didn’t know which charity. I recently found out that they go towards something called Bumpy’s Fund which supports a little girl who suffers from a rare form of pancreatic cancer and is currently being treated at the Royal Marsden Hospital.

Then someone at work told me to take a look at our organisation’s ‘small ads’ email page where another member of staff was asking if anyone was collecting milk bottle tops. I put out a post advertising that I would happily accept any lids available. This led to me being sent the box full as seen in the picture above.

This all reminds me of my own schooldays collecting the old foil lids for Blue Peter charities and how wasteful we can be in society when something as bin-able as a milk bottle top can be put to such good and inspiring use. I think a lot of us feel a bit uneasy when we throw something like this in the bin – that “surely this could be used for…. something?” thought that goes through your head before the bin slams shut and you walk away to finish off your cup of tea.

And its quite nice to be able to act as a little cog in the wheel of this particular process and nice to know that there is a little girl out there who might benefit from our very humble efforts. 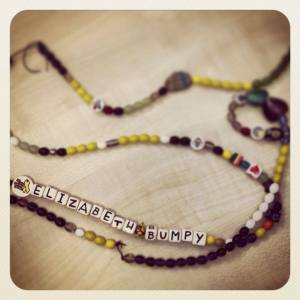