Well it is, isn’t it? I wouldn’t dream of sending my boys out dressed in pink – it would just confuse everyone! Is that right? No of course not, but society says…

Should we challenge society? On this I ponder. The hubster is a bit of ‘man’s man’ and would shoot down the very suggestion of mixed gender roles – which is why I had to laugh when, one day whilst driving along with the boys in the back JJ suddenly said “I’m going to drive a pink taxi when I grow up” and then, without any sense of irony, “Daddy will be pleased won’t he?” 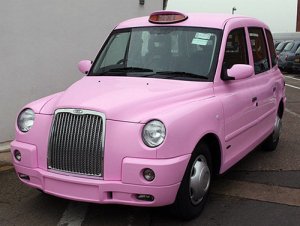 Don’t get me wrong, I’m not going to encourage my sons to paint their nails, wear my make up, etc. but when they grow up I will support their decision to do any of those things if that’s what they want and if they feel, like Eddie Izzard, that its part of who they are and if they aren’t prepared to let anyone else squelch that then good on ’em!

For me though, I fear the possibility of bullying when the school years are upon us. Whilst I desperately want to give a balanced view when my four year old asks me “Mummy, is pink for girls?” and often find myself trying to explain that pink mostly appeals to girls, but that no-one owns a colour, and anyone can choose to like whatever colour, accessory or toy that appeals to them – at the same time I don’t want them to be victims of those that have been told that boys who like pink are the lowest of the low.

I know I’m fighting a losing battle against society. Does this make me weak? Does this mean that I’m perpetuating gender stereotypes and when my boys grow up they wll expect the women in their lives to take responsibility for the full burden of childcare, housework and the entire planning and organisation of family life, the way it seems to be in the present day (obviously with some exceptions)?

I hope I can instill enough of a sense of respect, generosity of spirit, empathy and work ethic – both inside and outside the home – to ensure that there is a change for the better for (at least a very small proportion of) the next generation of mothers.

As for pink? Well I can see pink toys and clothes becoming less prevalent in favour of other, bright and neutral colours, but I’m afraid I can’t see a general acceptance of boys choosng traditionally  ‘girly’ things – not in my lifetime.

Linking up to The Prompt over at Mum Turned Mom.