I’ve been kind of aware of this whole mini milestone thing for a while – mostly through reading other peoples’ blog posts which have given me an insight into how their children are developing and what they’ve been up to lately. I can see that this is actually a really nice thing to do and something which not only provides a rolling diary of quickly changing habits and cute phases but also an electronic record book if you will, – a place to look back, press the pause button and enjoy the early years all over again (well, the good bits anyway!).

EJ has also lost out somewhat being a second child. This is not to say that I was particularly good at recording JJ’s milestones, but I feel like I definitely took more notice of what was going on day by day, and just had more time to appreciate the good bits.

Thanks to Caroline at Becoming a Stay at Home Mum, I’ve totally nicked her headings for this!

EJ has become very confident in exploring his environment lately and loves climbing. We recently visited a local playground with a metal climbing structure which included a narrow bridge (with bars to hold on to at head level), steps made out of wooden logs and a vertical metal ladder (again with hand rails) – all of which he managed on his own several times.

As a second child he is very keen to get involved in what he sees his brother doing and has practically nicked poor JJ’s metal scooter! Having said that, he likes to walk along with his feet on either side of the footplate, holding the handles rather than actually ‘scooting’. He also likes to sit on JJ’s bike (which still has stabilisers on) and attempts to put his feet on the pedals. It will be interesting to see if he is a natural on a bike once his legs are long enough!

He has been climbing our steep stairs for a long time – ever since he could crawl really, but now, rather than coming down backwards (the safe way which JJ was always taught) he likes to come down forwards like a grown up, but is always very careful to make sure he has gripped each banister before moving on.

Unlike JJ at his age, he shuns a pushchair, preferring the freedom to walk or run along wherever possible! In fact he cannot stand any form of restraint so no highchairs, no swings at playgrounds, not even hand holding if he can get away!

EJ’s speech is coming on with attempts at new words, sound-alike noises to some of the things we say (without actual recognisable words coming out!) and then giving us the occasional reason for a double take as he appears to mimic words or phrases perfectly! He is getting better at all our names Mummy (sounding a bit more like Memmy!), Daddy and JJ are all frequently used now.

When we read stories he likes to make the appropriate sounds for vehicles (sirens etc.) and if we ever spot cows he loves to moo!
Talking of which, when we drive past a field of horses he likes to wave hello and he also waves hello and goodbye frequently, occasionally doing the hand gesture for blowing a kiss. To say sorry he tilts his head and leans in to whoever is the recipient of the apology for a forgiveness kiss or cuddle, which is cute!

He doesn’t do a huge amount of imaginative play but he does like to play telephones! He also loves brooming trains around the wooden track which the boys share as well as playing with other kinds of toy vehicle on one of the two toy garages in the house. Talking of vehicles he loves to see motorbikes when we’re out and about and gets very excited pointing them out to us! 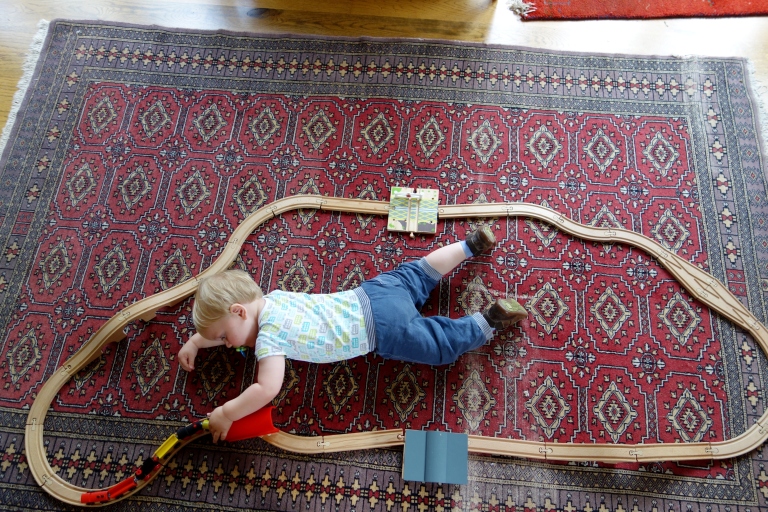 He has always been a sociable boy – as a second child you don’t really have much choice. He loves his brother and has been hugging other children and adults to say goodbye for months! He plays quite happily alongside his brother, although I don’t get to see much of his interactions with children of the same age as he has less friends than JJ did due to the fact that we haven’t been able to participate in any of those baby groups where JJ made some great friendships. We get together with JJ’s NCT besties once a week but he tends to happily go off and play on his own, be it at soft play or outdoors.

As I mentioned recently EJ, who has been sleeping through pretty well, aside the occasional dummy replacement, began waking up about 5ish crying recently. In hindsight I think he may have been overheating due to the warmer weather we’ve been having as he seemed to sleep longer the night I realised to stop putting socks on him!

Now he has moved into the room with JJ I am monitoring progress with sleep but it is early days. After two nights he seems to have done pretty well with the transition. As long as he has his dummy and a few muzzies he tends to be OK!

EJ has always had a good appetite. He tends to be more adventurous in trying different things to his brother. Yesterday they had cold chicken with broccoli, carrots and potatoes and he ate everything except some of the potatoes. He likes to use his hands though, and if I get anything on a spoon for him he insists on taking it off me to put it into his own mouth! Very independent bubs!

I made them jacket potatoes one evening this week and JJ would only have his with beans and cheese whilst EJ was happy to have prawns in mayonnaise.

There have been a few meltdowns recently. I see the terrible twos kicking in and it’s generally all frustration at not being able to express his needs, although sometimes I am well aware of what he wants and it’s just too bad! Just like his brother before him though, I know this is the easy end of the tantrum spectrum as distraction is such a great tool to snap him out of it.

I have to admit to coming down on his side in most tussles with his brother over a toy as I know it will be easier to reason with an older child. I do feel a bit bad about this as I don’t want JJ to think that I favour his brother in all things. He seems to be coping OK though.

I like to let him have the independence he craves where possible but just the other day he refused to hold my hand next to a road and I had to grapple him back to the car. I think we’ve all had those times though – nothing new or special, and they need to learn that safety comes first, even if the reasoning isn’t there yet.

At present EJ is loving his George (from Peppa) wellies:

The collection of ‘vehicle’ books by Tony Mitton and Ant Parker which his Grandad got JJ – the most favourite being Aeroplanes and Trains: 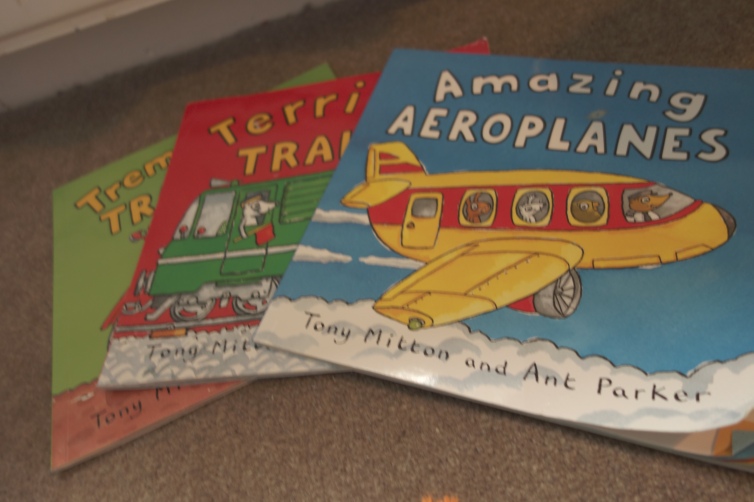 Ice lollies. We tend to have a stock of lollies of one sort or another in the freezer and he’ll just go and help himself, refusing to be fobbed off with an apple!!

Motorbikes. JJ used to get very excited if we passed any kind of bus or coach when out in the car. For EJ, apparently its motorbikes!

Mr Tumble. JJ has passed his love of Justin Fletcher’s colourful character on to his brother for sure. EJ often chooses to flick through JJ’s Something Special annual and loves it if I read a bit or point out all the different characters to him which is so sweet!

I have loved being able to log all these little things about my littlest boy and I hope I’ll be able to remember to put down in words all the little milestones of both of them in future as this record (and photographs) will be all I’ve got to remember the lovely bits of this parenting journey.