This is where the Photo Challenge REALLY kicked in because goodness knows there is no DIY in our household! Then I realised that at least we have the tools… 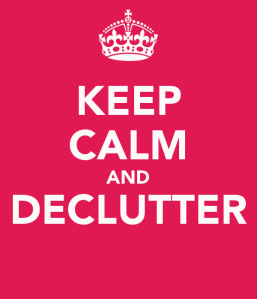 Recently we have been contemplating a potential house move. Not because we don’t like our house or the place we live in general, but mostly because we would like to live somewhere with both decent, off-road parking and the potential for expansion. We don’t want to move too far (and to be honest can’t afford to move to anywhere more affluent with better schools anyway) or spend any more money or raise our mortgage from its current level either.

On Monday this week the hubster arranged for an estate agent to come and value the house and he was already finished by the time I got home from our friends’ house with the boys. It quickly became apparent that, if we want to stand any chance of buying any half decent house that may come on the market, then we need our house to be on the market too (preferably under offer) so that we don’t miss out. I think the sentence “I can have your house on the market by the end of the week” came up which put me into a state of some panic and shock I have to say. Although we had been discussing the matter and brainstorming about our options, the stark reality of picking up all our worldly belongings and being out on our ears – possibly into a smaller home, maybe losing out on some character (our house is a Victorian red brick and full of charm in my opinion) really freaked me out!

But probably the one really frightening thought about getting our house on the market was the fact that this would mean the dreaded ‘de-clutter’ operation that we have been putting off for years.

I am ashamed to admit that I clutter. There should be a support group “Clutterers Anon”. The hubster himself is just as bad – actually worse to be honest. Neither of us does DIY. I try my hardest to keep the place to a certain standard (for example, the kitchen and bathroom are priorities and get cleaned on a rolling basis for hygiene and my sanity!) I also tidy up where possible within my own framework of acceptability and the clutter is generally hoovered and sometimes even dusted when time and opportunity allows.

But I am reminded of those reality programmes about hoarders and “How Clean is Your House” – not because we live like that at all, but because the people who do crossed a line at some point beyond which they were unable to get back to normality without a huge operation, or series of operations. I feel like I need to tackle a series of operations (and this is not just de-cluttering but attending to all those little tasks that we have let slip over the past five years – re-papering the dining room where damp had peeled the paper away; binning the crappy old curtain in the kitchen which my mum always likens to a tarts knickers; removing the unsightly old plastic bathroom cabinet (the doors of which fell off years ago!) – you get the picture). 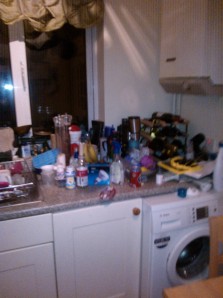 My attempt at a de-cluttered kitchen surface.

My nemesis in this (purely conceptual) drive to achieve the home of our dreams is Time. I work four days a week (varying hours) (plus sometimes a bit of overtime at the weekend) and when I’m not at work, I’m mostly trying to feed, dress, entertain, educate (?) (jury’s out on that one!), police, and just generally mother my four year old and 15 month old. In the little squeeze of “me” time that rears its head once in a blue moon, I dust the clutter. Or I cook a batch of food for freezing. Or I blog.

I have had one day off (both work and kids) in the last two months and that day was after we came back from our week in Cornwall so there was a huge amount of washing and organising to do. I also spent a couple of hours on one of my long-intended ‘operations’ filling 6 full black bin bags with old unwanted clothing (both mine and the boys) and took it to our local Cash4Clothes (brilliant idea, not only do your old clothes go to charity but you get a few quid back too!).

However, this demonstrates just how squeezed my time is. I feel like all the ‘jobs’ can’t be done without the initial de-cluttering operation, and I have very little energy or motivation to try and get my head round where to even begin, so the years continue to go by with little being achieved.

That said, the sudden thought of strangers wandering around my home and, even with the most open of minds and the greatest ability to see past the detritus of our lives, not being able to overlook the fact that the walls could do with a paint, several rooms need proper curtain rails, the tell-tale signs that the (dusty, unused) shower has caused damp problem on the ceiling below which we haven’t had the time or inclination to deal with, etc, etc, just strikes fear into my heart! Maybe it started off as blinkered laziness but at this point in our lives, it is all about time, or the lack thereof. Just the thought of buying and wrapping Christmas presents and doing the cards freaks me out right now – let alone attempting to sell our home and move house with a 15 month old wriggler!

So the question is: do we shelve our idea about moving at this point? Do we put the house on the market in its current state and let the ‘character’ speak for itself? Because one thing is for sure – my greatest desire and the one thing that I won’t be getting for Christmas this year, is Time…